Narangba Bowls Club was the venue for Brisbane Northside Arm Bowlers Association Inc on Sunday 14th August 2022. We had 22 players from 12 Clubs competing. We had players from Glasshouse, Pine Rivers, Caboolture Lakes, Narangba, Samford, Northern Suburbs, Toombul, Coorparoo, Brighton, Sandgate, Maleny and Aspley competing. It was a great effort from all who attended!

Judy Wyman (Caboolture Lakes) and Julie Womersley (Narangba) were the winners of our 2x4x2 Pairs Event with a 2 + 19 and Runners up were our Ken Nelson (NSBC) and Marko Kendes with 2 + 16. It was a hard fought competition again.

Graeme Pitt and Pat Fitzell (Pine Rivers) were the winners of our 3 Bowls Pairs with a 2 + 14 and Runners Up were Ken Nelson (NSBC) and Marko Kendes (Toombul) with a 2 + 3.

Overall winners for the day were Ken Nelson (NSBC and Marko Kendes (Toombul) with a 4 + 19 and Runners Up were Dave James and Nev Womersley (Narangba) with a 4 + 13. Well played to everyone involved.

We also had a triples game at this event and Rob Glazebrook (Aspley), Peter Leddy (Aspley) and Joe Walters (Maleny) were the overall winners in that game with a 4 + 24.

There were a lot of closely fought games on the day.

I would like to thank Narangba Bowls Club for their continued support and lovely sandwiches and catering for the day. We hope to see you again in 2023. 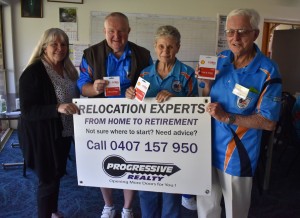